This paper deals with the use of a discrete simulation tool (SIMIO) in the production system design of a cement plant. This work is intended to be relevant in the specification of a proposal of an internal logistic and monitoring weighting system (Cachapuz - SLV Cement).

The model developed will guarantee efficacy and efficiency, helping to design new logistic processes through the integration of a global monitoring weighting system in a cement plant. (Vik, 2009)

This project is focused on improving internal logistic processes in cement production plants. The main will involve the integration of the SLV Cement logistic system and a discrete simulation software tool (SIMIO). This approach will help finding a high performance configuration and control of logistic components in cement plants. These components include weighting systems in both entrance and exit gates, registering and managing customer orders and requirements, truck flow control, etc.

Our project focuses on the identification of bottlenecks in the system, finding a set of possible solutions and choosing the best one. It is used computer simulation for this purpose. (Francis 1992)

SLV Cement is a complete logistic system for cement plants developed by Cachapuz [www.cachapuz.com] This automatic and integrated logistic system deals with all the processes since the arrival of a truck to cement plant to the shipping of cement. At the end of the process, even the administrative tasks like and printing the necessary documentation are performed automatically. Another interesting SLV feature is the complete integration with SAP business software (ERP).

Discrete computer simulation is the act of imitating the behavior of an operational system or process using an analog conceptual model on a computer.

The arguments below will help understand why simulation would be a useful tool:

Furthermore the following issues will identify why simulation would be relevant in the context of a cement company:

SIMIO is a quite new simulation tool; it was developed in 2007 and represents a new approach in simulation- object orientation. Modelling is based on describing system's objects and system behaviour is evolved by interaction of these objects. (Pegden 2007, www.simio.com)

For this project, SIMIO simulation software was chosen (other simulation tools are mentioned in Dias et al 2007) - for mentioned properties and also for these reasons:

As an illustrative example of the mentioned integration principle and for an easy understanding, we chose a simple model of a real cement plant and its logistic processes. This solution is based on general usage in any cement (or similar) kind of factory.

5) Interpretation of results and implementation

In Figure 1 there is a schema of this system. There are several types of trucks according to the kind of loads (incoming trucks with raw material and outgoing truck with final cement products)

These trucks must go through the entrance gates where they are registered and weighted. After that, they are sent into correct location in the plant for loading or unloading material. Then, trucks are weighted again and after final checking, they can leave the plant through the exit gates.

Through a preliminary analysis, some predictable problems would arise. Mainly, in this type of factories, the length of queues in some specific factory facilities - entrance gates, for example, always constitutes a relevant problem, causing long waiting times for customers. Usually this problem is due to inadequate number of facilities/resources available (e.g. loading places in warehouse), to long loading times, to a bad organisation of work flows that could lead to:

Though, computer simulation could be a powerful tool to improve processes and draw suggestions for modern control systems implementation (Benjaafar, 2002)

For a correct analysis and the creation of an adequate simulation model, it is necessary to use valid data as:

These data are processed for making analysis and formatted to SIMIO as it is shown in the Figure 2 (rate table of trucks within a day and example of production times). 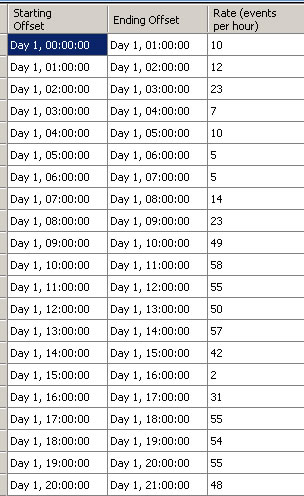 For the creation of a simulation model, standard elements as source, process and sink were used, connected by a set of paths. Four main processes were identified: 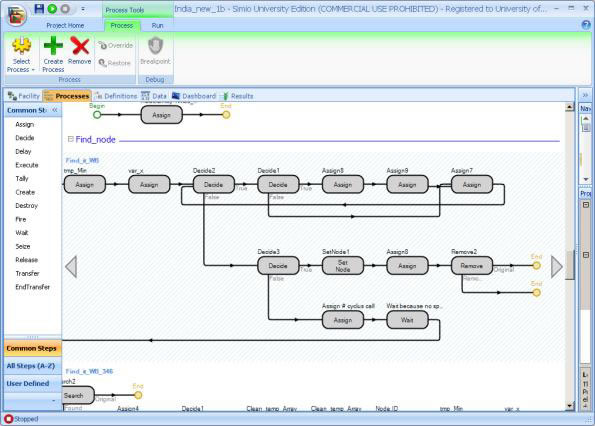 SIMIO supports 3D graphics and animation. It is possible to import plant layouts in 'dxf' format and to use Google 3D Warehouse library for inserting 3D object models, creating realistic 3D plants. In Figure 4, there are some screenshot examples for this project. 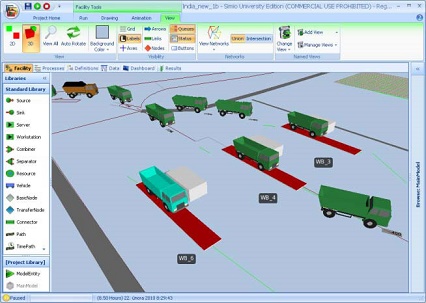 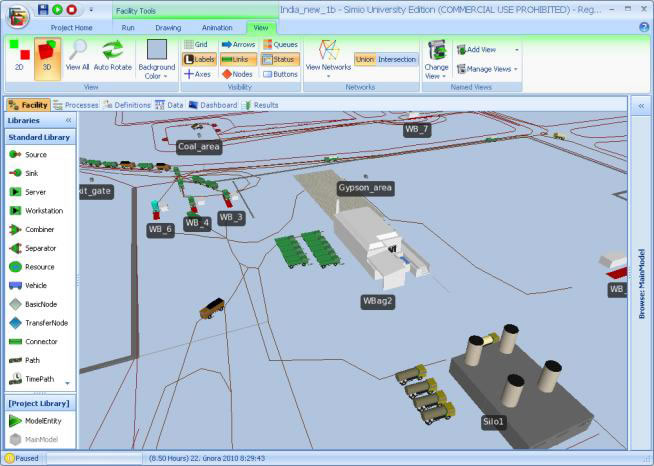 One of the project aims is to find out adequate sets of parameters for system configuration:

Then a comprehensive report is generated. In this short prototype described, the most important performance indicators are:

Results of these experiments are shown in the table in Figure 6. Each row represents the results of one experiment according to parameters shown in Figure 5.

2.5. Interpretation of results and implementation

Figure 7 shows graphically the number of trucks inside the plant during a whole week. These data were obtained by exporting appropriate arrays from SIMIO and confirm previous set of conclusions.

Figure 7 - Graph of number trucks inside the factor

For trucks behavior analysis, a special array was created in order to record important moments of each truck in the system (for example arrival time for each truck, registering time, calling time, operation times, dispatching time etc.) Results of this analysis are:


Examples of these results are shown in Figure 8. 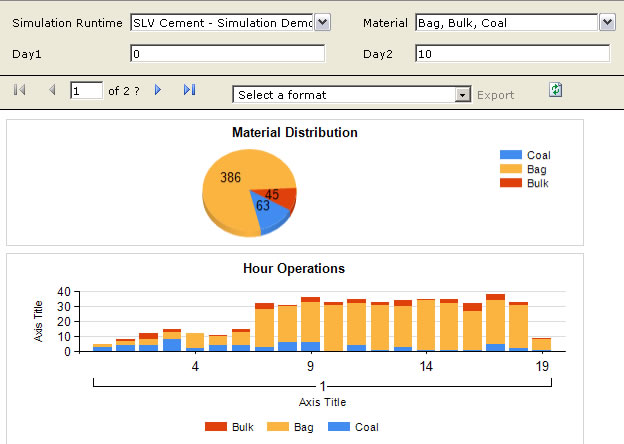 The usage of an internal logistic system and discrete computer simulation for the design of this type of factory seems to be a good approach. It is possible to virtually implement a logistic control system to an existing factory and analyze corresponding impact without any type of physical intervention in the real factory - it is also possible to completely design a brand new factory.

The previous simulation model could also be used to:

With our integrated approach, it is possible to achieve a global system configuration and find the best solution for each set of resources (e.g. facilities, space, human resources) as well as for reducing customer (trucks) waiting times. These first results do seem to be a good motivation for next steps in the use of simulation.

Next steps for this project would then include the definition of the entire detailed model and respective full implementation of the logistic system. Also full realistic 3D animation would be created.

This project is part of research cooperation between University of Minho (www.dps.uminho.pt) and Cachapuz (www.cachapuz.com). Cachapuz is member of one of the biggest European weighing groups (the Bilanciai Group) and have a strong positioning in the integration and automation of the logistic operations on Cement plants.